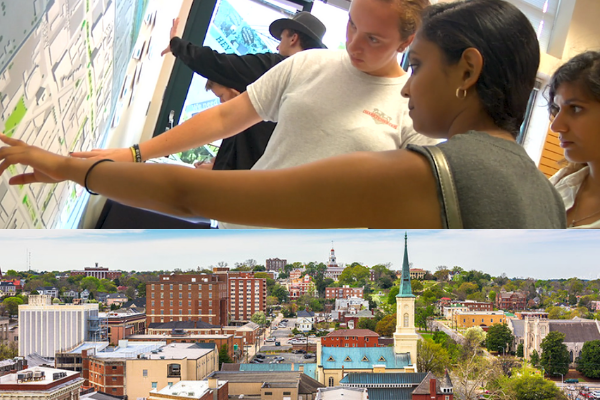 With support from Knight Foundation and the Peyton Anderson Foundation, the fund will advance ideas that improve Macon’s urban core

MACON, Ga. — Jan. 19, 2021 — The Community Foundation of Central Georgia today announced the second Downtown Challenge, a grant program advancing the community’s best ideas for downtown Macon. The Challenge is supported with a combined $1.5 million from the John S. and James L. Knight Foundation and the Peyton Anderson Foundation. Ideas from the Challenge must support the newly-updated Macon Action Plan, also released today.

“The Downtown Challenge is an open invitation to nonprofits, businesses and individuals who want to improve the community,” said Kathryn Dennis, president of the Community Foundation of Central Georgia. “We look forward to funding your ideas and encouraging your hard work in any way that advances the updated Macon Action Plan.”

Applications for the first-round of grants will open tomorrow afternoon at 3:00 PM and will close on March 15. To apply, visit https://cfcga.org/grant/downtown-challenge/

The refreshed Macon Action Plan builds off the original plan, supported by Knight Foundation and Peyton Anderson Foundation, which launched in October 2015. With a focus on urban core economic development, experience, living and connectivity, the plan has been updated to include more family friendly, inclusive, creative and green strategies. The plan refresh better reflects changes to Macon’s urban core, and was implemented as the original project was largely completed ahead of schedule.

Many of the projects funded by the first Downtown Challenge have become permanent fixtures in downtown Macon, such as the yearly Downtown Christmas Lights Extravaganza, which has over 250,000 visitors and has increased revenue for downtown businesses. The Challenge also supported public space projects, such as the Ocmulgee heritage trail’s expansion into the downtown Macon grid. Since 2015, the number of trail users has more than doubled.

“Economic development downtown fuels the resurgence of our entire community, and the refreshed Macon Action Plan is the way the entire community agrees to make it happen fast, equitable and durable,” said Josh Rogers, president and CEO of NewTown Macon.

The refreshed Macon Action Plan will be presented to the boards of the Macon Bibb County Urban Development Authority on January 26 for formal adoption and NewTown Macon adopted the plan on January 13th. The plan will be shared with multiple supporting agencies for consideration.

“The refreshed plan builds off the incredible success of the original Macon Action Plan and Downtown Challenge,” said Alex Morrison, Macon Bibb Urban Development Authority (UDA) executive director. “We hope to harness this initial success and help the urban core reach new heights through greater inclusivity and a more targeted approach to projects as the growth moves out to other neighborhoods. When downtown is truly everyone’s part of town, everyone throughout the community benefits.”

For more information on the Downtown Challenge, contact Kathryn Dennis, president of the Community Foundation of Central Georgia at 478-750-9338.

For more information regarding the Macon Action Plan, contact Alex Morrison, executive director of the UDA at 478-955-1595.

About the Community Foundation of Central Georgia

The Community Foundation of Central Georgia was founded in 1993 by a group of citizens interested in encouraging philanthropy and strengthening communities. Since then, the foundation has awarded more than $90 million in grants. As a local center for philanthropy, the foundation works with individuals, families, corporations, private foundations and nonprofit organizations to carry out their charitable objectives and address emerging community issues. Our donors make possible the foundation’s mission to enhance the quality of life for the people of Central Georgia. To learn more, visit cfcga.org.

About the John S. and James L. Knight Foundation

Knight Foundation is a national foundation with strong local roots. We invest in journalism, in the arts, and in the success of cities where brothers John S. and James L. Knight once published newspapers. Our goal is to foster informed and engaged communities, which we believe are essential for a healthy democracy. For more, visit kf.org.

About the Peyton Anderson Foundation

The Peyton Anderson Foundation serves as a lasting memorial to a man whose goodwill lives on long after his death in 1988. Peyton Anderson, owner in the 1960s and 70s of the Macon Telegraph and the Macon News, was a highly successful businessman, family man, civic leader and philanthropist. In his will, Peyton Anderson assigned the bulk of his estate for charitable purposes to benefit his hometown and region of Macon and Central Georgia. He maintained that the people of Macon, Bibb County and Central Georgia had been good to him and he in turn wished to be good to them. His instructions were, “Reward good doers, not do-gooders.”